The worldwide increase in the occurrence of UV-induced skin diseases (black melanoma) forces us to be more aware of how to deal with solar radiation and how to use artificial sunbeds for cosmetic and medical purposes. The lack of suitable measuring technology (sensors) for obtaining objective and comparable measurements on the UV radiation exposure or absorbed radiation dose is a problem for physicians and private individuals alike - but an indispensable prerequisite for the effective control of black cancer. 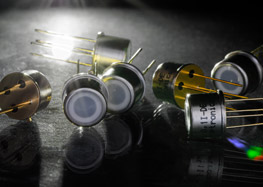 The sensor weights the radiation according to the erythema function and is cos-corrected. The suitability of the sensor has been proven by dermatologists in several large-scale experiments, it is used in radiation dosimeters and measuring instruments for the UV index. By using the sensors it is possible for dermatologists to objectively measure the recorded radiation dose and thus to collect genuinely comparable data on UV-induced skin changes. Artificial suns (irradiation devices) deviate strongly in their spectral intensity distribution from the solar spectrum. For this application special sensor variants have been developed which are adapted to the different types of UV lamps and the coupled biological mechanisms of action.

The only reliable basis for an objective measurement and comparability of the data is the evaluation of the radiation absorbed via the skin in accordance with the biological function (erythema according to CIE 87). As part of the Gewiplan project 150/98 "Radiation sensor for the protection of the skin", a sensor suitable for this task was developed on the basis of SiC photodiodes.